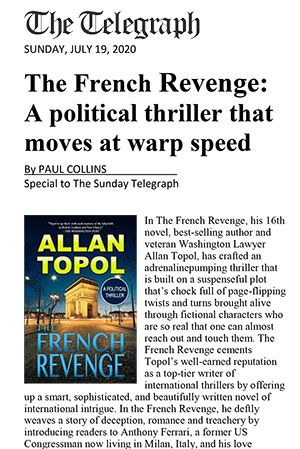 Reviewed in the Nashua Telegraph:

In The French Revenge, his 16th novel, best-selling author and veteran Washington Lawyer Allan Topol, has crafted an adrenalinepumping thriller that is built on a suspenseful plot that’s chock full of page-flipping twists and turns brought alive through fictional characters who are so real that one can almost reach out and touch them. The French Revenge cements Topol’s well-earned reputation as a top-tier writer of international thrillers by offering up a smart, sophisticated, and beautifully written novel of international intrigue.

Former US Congressman Anthony Ferrari is now living in Milan and romantically involved with the beautiful Chiara Moretti, one of the world's top concert pianists. When the two of them are vacationing in Corsica and running on the beach, Chiara is suddenly shot. Enraged, Anthony launches an investigation to determine who is responsible and to punish them.

This investigation enmeshes him in French politics and he clashes with Louise, a French intelligence officer and former lover of his who wants to rekindle their relationship. He finally concludes that Russian President Volkov, a long-time enemy of his from his days as a congressman, is responsible and he plans to assassinate him. But can he actually kill a head of state and get away with it? And what will the ramifications be for Chiara, who's alive but terrified the killer -- or killers -- will make a second attempt?

Full of dazzling international locations and furious action, THE FRENCH REVENGE is a thriller that will keep you guessing until the very end.